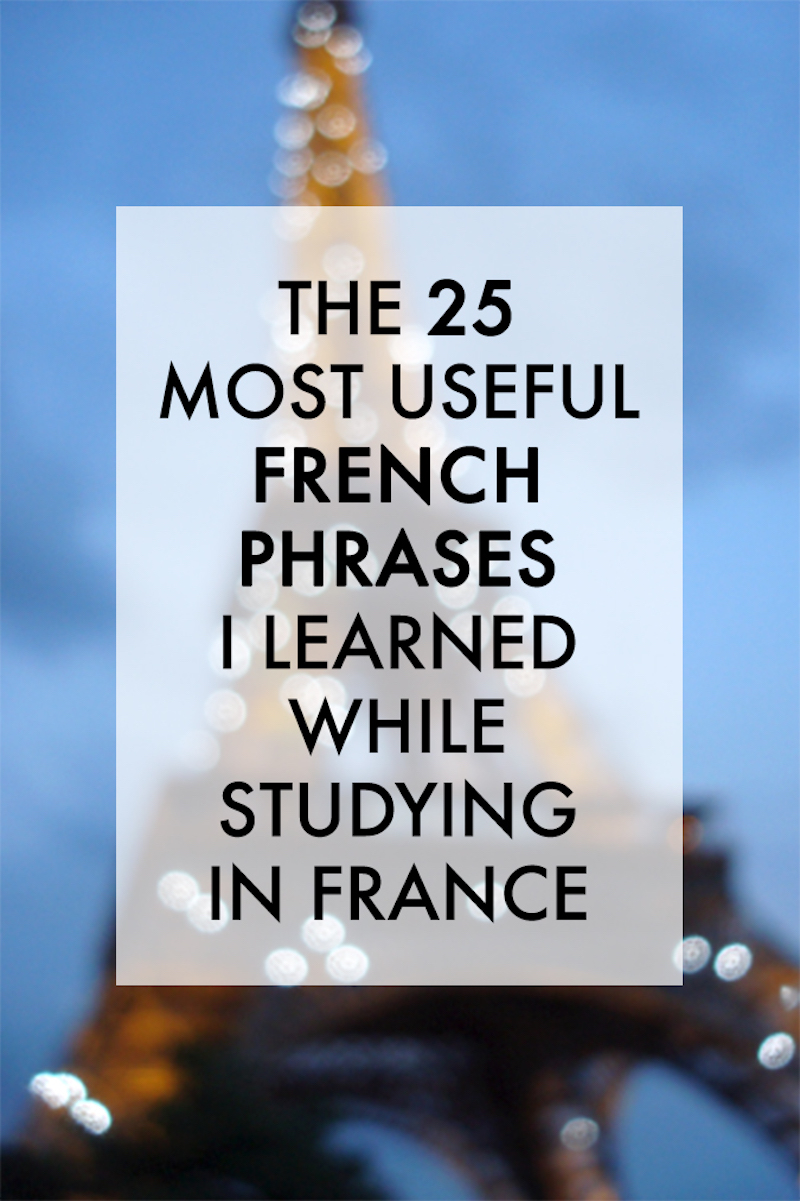 Once upon a time I studied abroad in Lyon, France, for five months. It was wonderful. I lived with a host family and attended a French university and everything. I ate tons of croissants and Nutella. I even learned the way of the French “bise” greeting.

So I thought for this month’s “Brainfood” post I would share with you what I found to be the most useful French phrases I picked up while studying abroad in France. It’s crazy because most of these are things my textbooks did not teach me. It took me being immersed in the French-speaking realm to pick them up. And now I’m sharing them here. Think of them as a souvenir from France, from me to you.

So if you are a French-language student who is looking to shift into more colloquial, conversational French, this post is for you. 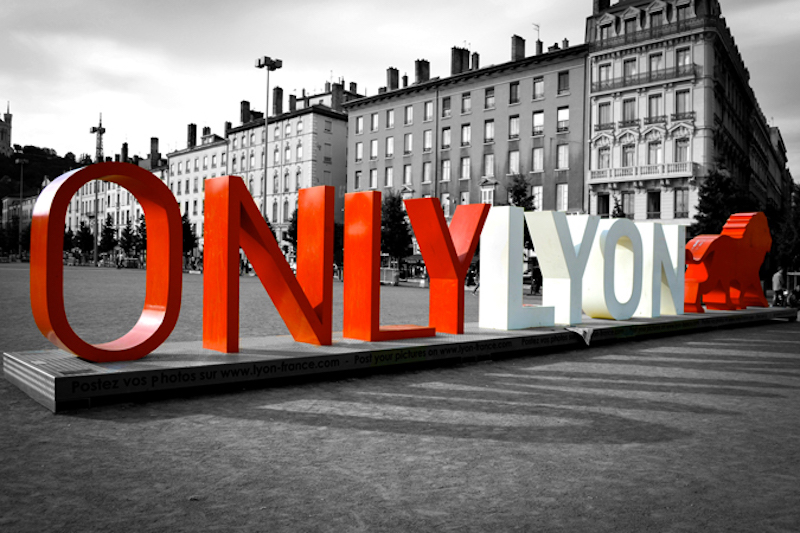 You’ll need this whenever you go to make a purchase with your American credit card. The credit cards there all have a chip in them, with a pin number attached, and chances are your credit card is of the magnetic strip sort. This is probably the phrase I found myself using the most often in France—I’m not even kidding.

You can use this the way you would in English—after a super long explanation to ask the person you’re talking to if they understood you. But I actually asked this all the time when speaking with francophones to ask if what I was saying was proper French. Just pay attention to how you say it so your question is clear.

I wanted to present this right after C’est logique? because I noticed the answer I usually got after that question whenever I wasn’t making sense was not “ce n’est pas logique” but ça n’a pas de sens. So, you could say that c’est logique and ça n’a pas de sens are opposites.

Because a French person is going to use a new word on you, and you’re going to have to stop them to ask how to spell it and what gender it is. I’d specify ce mot instead of just saying ça because you might accidentally ask them how to spell the word ça.

You can also say Comment l’épèlle-t-on? to simply say “How do you spell it?”

I know. It looks like it would mean “sweetly.” And I’m sure you could probably use it that way. But the majority of the time, a French person will use it to mean “slowly” or “gently.” My host mom used it on me when I jumbled some of my French while talking to her, and at the park I saw a parent yell it at her son who was rollerblading too fast.

You can essentially use this the way you use “go ahead” in English. So if you accidentally interrupt someone, or if you want someone to walk ahead of you on the sidewalk, reach for this phrase.

My host brother taught me this one. We walked around Lyon for, like, 20 minutes while I kept asking him, “Which way is it?” And he would say, “Oh, it’s that way.” This one’s crucial for when you’re in a new place.

On y va has kind of got that Ca va? Ca va. dynamic going on, doesn’t it? I found this to be a slightly more colloquial version of allons-y, which also means “let’s go.” I’m not sure that allons-y can be used as a question, though…

Yeah, so don’t try to translate “I’ll be right back,” into French, word-for-word. This is the phrase you need.

Just in case someone slaps you or something.

Fine, so maybe I didn’t use it a ton. But hey, should you find someone chewing you out for something you did by accident, you might as well be able to communicate that. (I may have used this phrase to express that I’d accidentally touched a painting at an art museum.)

Notice the exclamation point. You’ll only want to use this on, say, a dog that keeps barking, or a person who keeps mocking you. So don’t say it when someone is pouring you a drink at a restaurant! (Say c‘est bon in that case.)

You know—to say that you’re used to doing a certain thing. Easy. Just put the infinitive of a verb after à.

These two are a little different but similar enough to pair them together. Je suis (très) content(e) de means “I’m (very) excited/happy to/about…” while j’ai hâte de… means “I’m looking forward to / I can’t wait to…” With either phrase, you can simply put the infinitive of a verb after de to express what you’re excited about doing. But with je suis content de, you can just slap ça on after de to say “I’m happy about that.”  Does that make sense?

I would use these over je suis enthousiaste or je suis excité(e) when expressing excitement about something. The French tend not to exaggerate as much as we do in English, plus excité has sexual connotations. (Though, you can use excité in the right context, apparently. I still wouldn’t risk it.)

It may consist of three words, but you’ll pretty much just be inserting it in a sentence where you would use one word in English. Example: “That was tout à fait / quite relaxing.”

Bonus usage: To exclaim “Exactly!” Example: “Is this what you mean?” “Oui, tout à fait!”

Notice that this isn’t pronounced the way it looks. Use en fait the way you would use “in fact,” “as a matter of fact,” or “actually” in English. So, for example: I saw Céline yesterday. En fait, she was with her new boyfriend, Jean.

So far I’ve only encountered this adverbial usage of en fait I’m describing at the beginning of a sentence. So, keep it there!

Both of these can basically be used to say, “Yeah, that works for me.”

Bonus usage of ça marche: to express that something is functioning properly. I’m not sure that I even ever heard the word fonctionner while in France.

I remember going to a pub for trivia night with a group of French students, and when we noticed that it was way too crowded, one kid said, “Il y a trop de monde.” So I noticed that I heard il y a beaucoup/trop de monde for “there are a lot of / too many people” more often than I heard il est bondé for “it is crowded.” In faaact, our girl Emilie in the comments tells us that bondé is a bit on the formal side for everyday conversation.

Pay close attention, and you’ll hear a French guy or gal mutter “up” to himself or herself while doing something like cleaning the kitchen. It’s kind of like how we mutter “ok” to ourselves in English. This is something that I wouldn’t try to incorporate into my own French vocabulary, actually, because it’s more of an acquired habit…it’s hard to mimic a natural usage of hop.

I also saw my host mom say Hop là! upon finally getting a bowl into a very high cabinet in the kitchen. So just pay attention to where you see this word. It’s fun 🙂

I included this because I think oftentimes people try to use this to indicate being pleasantly surprised at something or to remark at something risqué. But in most cases, you’ll be remarking at something unfortunate. Dropped all of your papers? Oh là là. Can’t think of the French word you want to use? Oh là là… Forgot your umbrella at the restaurant? Oh là là! J’ai oublié mon parapluie.

I’m really happy about this phrase because I say its English equivalent all. the. time. C’est trop… is used in French very much like “That’s too…” is in English. You say it when something is beyond “very” something. So if, for example, someone tells you a hilarious joke, you could say C’est trop bon! Just don’t overuse this phrase.

Yep. You’re literally saying “That sends…heavy…pâté…?” but don’t question it. It’s nice to know something other than c’est cool, huh?

A Few Tips on Improving Your French

1. Live with a host family, or, at the very least, make a few French friends you can spend time with while speaking only in French.
French students can be a little shy, so you may have to be a little proactive about it, but you’ll likely find some kids your age who will find you interesting as a non-native French speaker 😉

2. Spend time perusing the aisles of grocery stores.
Carrefour and Monoprix are especially great stores to go to because they have food, housewares, cosmetics, clothing, etc. Pay attention to how they label nail polish, baking powder, baking pans, feminine products, stamps, applesauce…everything. Plus, when you see a word visually along with its context, you’re much more likely to remember it.

3. Remember that no language is a coded form of another.
So, instead of thinking in terms of single words all the time, look for fixed phrases and differences in sentence construction. You wouldn’t expect tout à fait to mean “quite” at first glance, would you? Or what about how much stricter French is about the placement of adverbs? Moreover, understand that an English word and its French “equivalent” will not share all the same meanings and connotations with one another. “Stamp” in English refers to something you apply ink to and to postage. French? Tampon (yes, tampon) refers to an inking stamp, and timbre refers to postal stamps.

4. It isn’t just about language.
Spend some time observing French gestures, habits, ways of life, etc. While of course you don’t want to stereotype or generalize, you will likely notice differences between how you do things and how the French do things. I noticed while eating with my host family, for example, that you want to keep both hands visible at all times at the table. Baguette has at least three different uses at the dinner table, as well (eating, scooping food onto your fork, and serving as a vehicle for your after-meal cheese). I also noticed that there is a whole lot less multi-tasking with eating. You sit down at a certain time of the day. You eat. You enjoy. So I’d try not to walk around chowing down on a waffle with Nutella on it 😉

is the best one I’ve come across.)

Comme Une Française. This girl is just wonderful. She posts videos with majorly helpful information like, “5 Embarrassing Mistakes in French,” “10 French Gestures,” “5 French Slang Expressions Using Names,” and so much more. You’ll go to this site and want to just ingest the whole thing in one sitting.

Cooking. Try your hand at preparing some local cuisine using French recipes! Marmiton is a common go-to source for recipes in France.