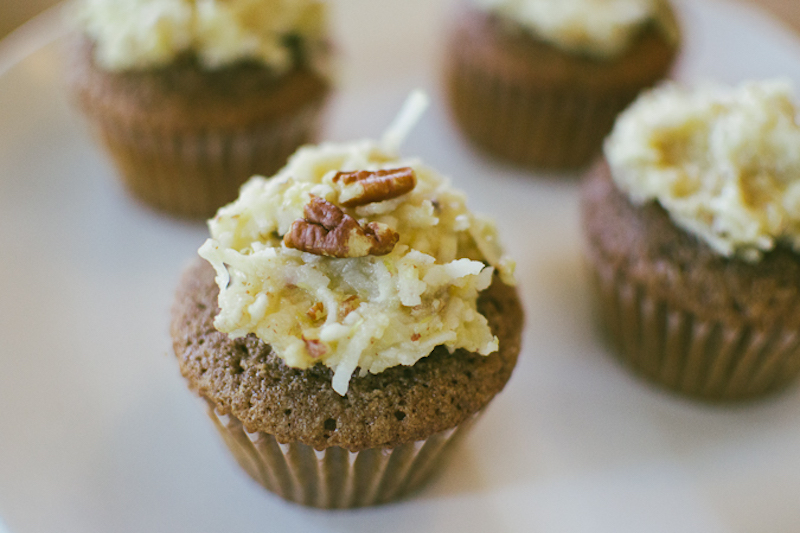 German Chocolate Cake, unsurprisingly enough, is not actually German. The name comes from a man named Sam German, who created a special type of dark baking chocolate in 1852 for Baker’s Chocolate Company. This chocolate was sold as Baker’s German’s Sweet Chocolate in honor of him, and later on in the 1950s, one woman created the famous cake recipe using this chocolate. Hence, German’s Chocolate Cake. We simply dropped the ‘s after a while. 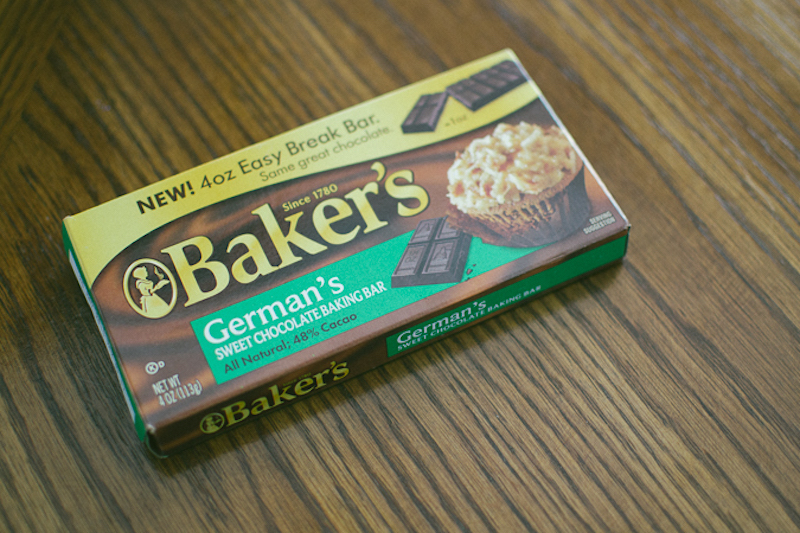 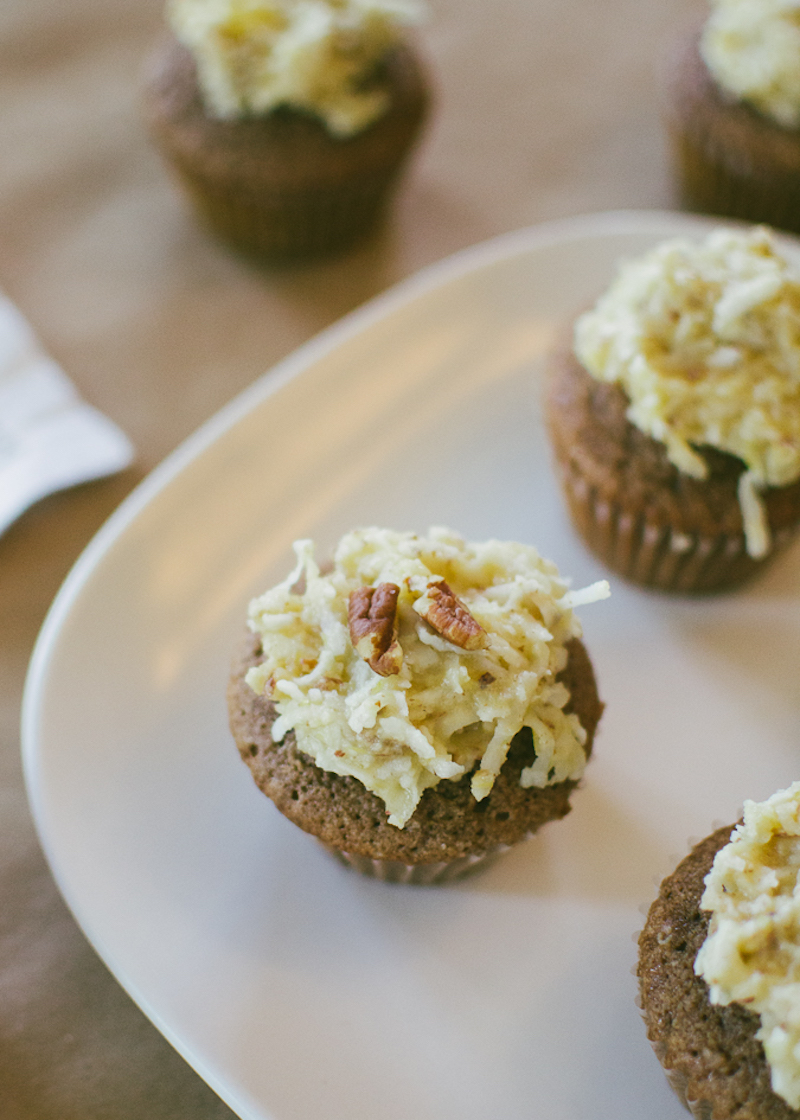 Makes 18 cupcakes or just over enough batter for one 9″ round cake pan. Remember that you need to double the recipe if you’re making a full-sized cake.

* Don’t have this? It’s all good—put 1/2 TB of lemon juice in a measuring cup and add enough milk to make 1/2 cup. Let sit 5 minutes before using.

In a medium-sized bowl, sift together the flour, baking soda, and salt. Set aside.

In a larger, microwave-safe bowl, melt the butter and chocolate by microwaving it at reduced power (around 70%) for about 90 seconds. Stir well until completely melted.

Mix the sugar into the chocolate mixture. Then, beat in the egg yolks one at a time.

Stir in the vanilla.

Now beat the egg whites until you get soft peaks…then fold into cake batter. (To fold, gradually add the stiffened egg whites to the batter and use a gentle cutting-and-turning motion with a rubber spatula to incorporate. No stirring!)

Baking time. For cupcakes, fill your liners 2/3 full and bake for 17 to 22 minutes. For a cake, fill a greased 9-inch round cake pan about 2/3 full with batter and bake for 30 to 40 minutes. Use the toothpick test for perfect doneness. 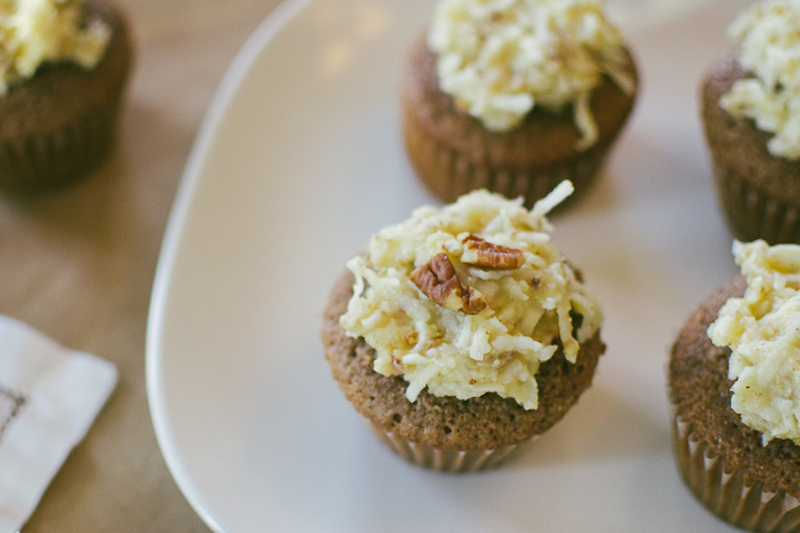 As for the frosting, for a true German Chocolate Cake, you’ll want a coconut pecan mixture like what I’ve topped these cupcakes with. Get the recipe for Coconut Pecan frosting here! 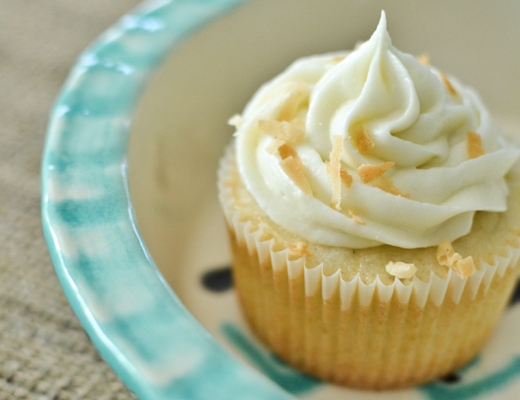 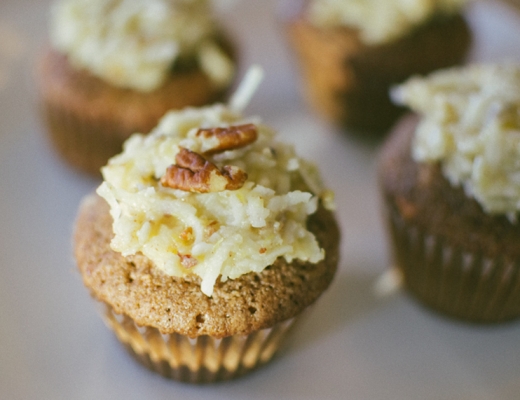